Reasons not to wear rings while beekeeping 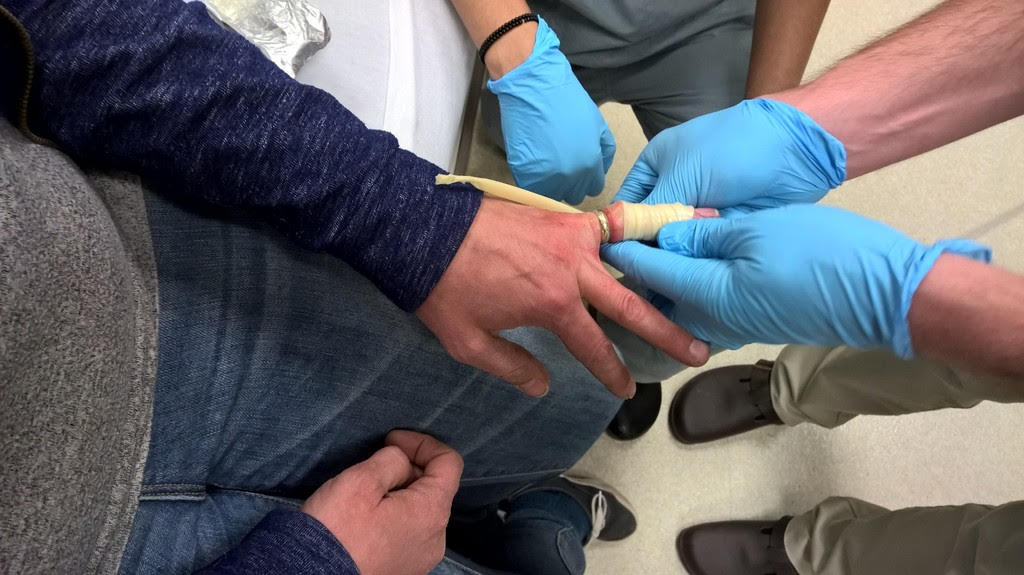 Yesterday was an eventful day for me.

It was funny in a way because I really did not have a good feeling about it from the start.

I stopped at the local apiary to pick up the package bees we had ordered. It went well enough, all the packages were ready to go. 25 of them filled up the backseat.

That many bees in the back of a truck for an hour and a half is not the most enjoyable ride of my life. There’s a lot of buzzing. I don’t think they liked the radio so after the first half hour I turned it off and they seemed to settle down a bit.

My first mistake was not going out to all the yards and preparing things. I thought it would be quick and easy. I did prepare the home yard but didn’t end up getting to it. This is what the experienced beekeepers told me, ‘it should be quick and easy. It shouldn’t take you more than an hour and a half to put all of the packages in’

I hadn’t put package bees into the dead outs last year so this was a new thing for me. Also this year we had ordered 6 packages too many. It was supposed to work just fine anyways because we would be able to split some of the dead outs which had two brood chambers into singles.

Well, splitting the dead outs and preparing that site took a lot longer than expected. I decided to do all the splits in our Fisher 2 yard because we had room for them there. So this is where my son Joe and I started because it would require the most work.

My second mistake was not wearing proper bee gloves.

All the beekeepers at the larger apiary that is mentoring us do not wear gloves. It’s easier to do their work without out them. And I hadn’t needed much protection putting in the mite strips. So I think this is where I took wearing good gloves for this a little too lightly. I decided to wear my garden gloves for some minimal protection. We have nice lambskin gloves that work well. But they were quite stiff from last years honey pull and still needed a good washing.

The garden gloves worked fine when we were preparing the yard. I didn’t even have my veil on until right before we opened up the packages. It was cloudy and a little windy and it was late in the day so all of the bees from the live hives stayed inside and didn’t bother us too much. This kind of day is perfect for putting in package bees because they’ll stay in the box you’ve prepared for them and won’t want to fly away.

When we started to open the packaged bees it was getting pretty late. It was definitely after eight and it was starting to get dark. The first one went ok. I gave the bees one good shakedown to get them all to the bottom of the package, opened it up, pulled out the sugar syrup, then shook the bees into the prepared hive. I took the queen cage out of the box, it wasn’t easy to open but I got it open, then put her close to the bees that were already in the box and she walked out into the hive. We put the lid on and started on the next hive.

On the second package of bees, I decided that I would take the queen out before I shook all the bees in the box because I didn’t like the idea of the queen being shaken around so much. So this was the only thing different from the first box.

The thing about package bees is that they’re a little more aggressive than your average Saskatchewan bees, or the bees we get with the Kona queens from Hawaii. The package bees come from New Zealand and they’ve been in transit for seven days. So this should be making them unhappy already. They’re nowhere near the aggressiveness of the one swarm hive we caught a couple years ago. We always saved that one to work last. This was one of the hives the bear destroyed and we were not sad to see it go.

Anyways, taking into account the aggressiveness of the package bees and the fact that they had been in transit 7 days those bees were not very happy. While I was trying to get the queen out of her cage the bees started stinging me in the hands, through my gloves. After getting the queen out I walked little ways away from the hives to make sure I got the stinger out of a sting on my right hand which I knew was a bad one. You can always tell a bad sting because the venom keeps on stinging a little longer. At the same time I was getting that stinger out of my hand I realized there was a bee buzzing around in my suit close to my head. I ended up getting that one out without a sting.

By that time I was feeling like I was having a bad day. I definitely wasn’t having fun, that was for sure. Joe could probably tell I was a little irritated.

We put in six of the packages and I decided it was getting too late. We were having trouble seeing the queens to let them out of their cages. We packed everything up, including the packages we hadn’t put in yet and headed home.

I was not happy, I thought I would get all the packages put in before it got dark! Now I would have to go out again tomorrow to finish things up.

It was when we were putting the packages in the garage that I noticed I had been stung on my left-hand ring finger and my finger was starting to swell. This was bad. Very bad. If I didn’t get that ring off soon it could eventually swell up enough that I could lose my finger. The swelling from the stings we’ve been getting was always worse on the second day so I knew it would get worse. At the yard, I had been worried about the bad sting on my right hand that didn’t have any rings and didn’t notice that I had been stung on the ring finger of my left hand.

I ran into the house, grabbed the dish soap and using some water tried to get it off. This didn’t work. My son found a couple Benedryl and I took these. Next, we tried Vaseline and almost got it off but the swelling was pushed to the tip of the finger and we couldn’t get past this.

This is when I decided the ring needed to be cut off.

Joe offered to drive me to the city emergency for this. So we headed to the city. I called my husband Jeff just as we were leaving. He tried to convince us to turn around because he was confident that he could cut the ring off for me. Joe and I weren’t so confident. Jeff can be very convincing. He met us not far from where we started out and convinced us to turn around.

So I let him give it a try.

He was very confident that he could use either the hacksaw or the Dremel to cut it off. It was going to be the Dremmel, this was probably exactly what they would use at the hospital, he said.

I put my hand palm up on the workbench. He started on the ring with the Dremmel. Ouch, that hurts, I said. The Dremmel had barely nicked the ring. His hands were shaking. His hands always shake. That’s part of my nonconfidence in him. He convinced me to let him try it again. He nicked it a bit more and it hurt when he did it. This time I convinced him I’d rather go to the city and let them cut it off there.

So we went to the city. And they got it off, without cutting it! I was pretty happy when it came off.

We have a new rule.

No rings while working with the bees!

That was my third mistake that day.